Reserved Seating for the Parade

Did you know you could reserve a seat, right on Main Street, to watch the Disney World Boo-To-You Parade? It costs more but it is available by purchasing a Happy HalloWishes Dessert Premium Package. Get a special dessert and seating for the Parade and Fireworks with this amazing Disney Package.

As the Disney World Boo-To-You Parade makes its way down the streets of the Magic Kingdom, you will see many of your favorite Characters. The Disney World Boo-To-You Parade starts off with the Fanciful, Fun and well-known characters your kids really want to see. These are the ones that are not scary like, Snow White and some of the Dwarfs, Winnie the Pooh and Friends and the most anticipated, Mickey and Minnie Mouse, to name a few. After this opening of happy, friendly characters, the more frightening groups come through. Nothing to be concerned about though, this is the not-so-scary parade after all. The Pirates are on deck with the next float including Jack Sparrow in the Crow’s Nest, Peter Pan and even Hook. A crowd favorite has to be the Haunted Mansion Group as the move through. The graveyard ghosts leading the procession are spooky indeed but the rhythm that they bring along with odd dancing and scraping of shovels make this a real family treat. There are many more Villains to come and the Disney World Boo-To-You Parade is sure to make a lasting impression on the little ones.

Best Location to Watch the Parade

There are a number of good places to watch the Disney World Boo-To-You Parade. Let’s take a look at the Parade route on a Google Disney Map and see: 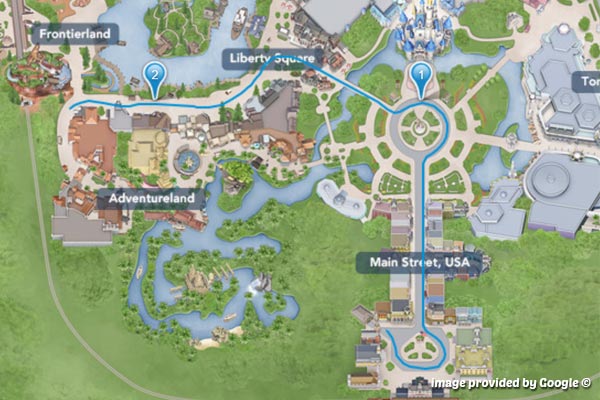 Looking at this map, notice that the Parade starts in Frontierland and continues through the Magic Kingdom, ending near the entrance. Frontierland is a great place to view the Disney World Boo-To-You Parade and anywhere around the main hub in front of Cinderella’s Castle is fantastic. Main Street is a great option as well.