Disney World Not So Scary Halloween 2015

It is on again this year and as always the Disney World Not So Scary Halloween 2015 is sure to get you going for the Halloween Season. A few changes have been made to the scheduling in 2015 but for the most part, this Disney Halloween Experience continues with many of the traditional events it has carried over the last few years.

It is worth mentioning that the ticket prices for the Disney World Not So Scary Halloween 2015 Party has gone up a little this year over last year. Depending on the day you decide to visit, an Adult ticket can take you back anywhere from $68 up to $87 per visiting night. The Kids tickets are a few dollars less ranging from $63 – $82 per visit. Most guests find that they ticket price is certainly worth it for the night of fun that comes along with the Mickey Mouse not so Scary Halloween Party.

2015 Mickey Not So Scary Party Dates:

The Disney World Not So Scary Halloween 2015 really gets kicked off at 7pm but it is worth noting that your ticket allows you to enter the Magic Kingdom at 4pm. That is a full 3 hours of time to look around at all of the Disney Halloween Decorations and find out how amazing the Walt Disney World Halloween in 2015 can be.

I have a regular Disney Ticket, can I stay for this event?

Unfortunately not! This Halloween Spectacular is a special event and costs extra for each visitor. Each guest who purchases a ticket, gets a special wristband allowing them to stay in the park. If you do not have one of these, you will be asked to leave the park by 7pm.

The biggest change you will see this year, if you have been in the past, would have to be the Disney World Hocus Pocus Villain Spelltacular. This new Musical number starts off with the Sanderson Sisters from the Movie, Hocus Pocus. In all their glory, they light up the stage and bring the greatest compilation of Disney Villains you have ever seen. Truly, a musical number the whole family will want to see.

It wouldn’t be a first class Disney Event without the Disney World Boo to You Parade, now would it? Of course not! This is a staple in the entire Disney Halloween production. By far, the grandest entrance of all the Parades, has to be the Headless Horseman riding down the streets. The Parade might change a little each year but it is full of fun characters and wicked villains to put a scare in the air of the Halloween 2015 Disney World night.

Make sure you catch the 2015 HalloWishes Fireworks Show

You might think, how can I not watch the Disney World Halloween Fireworks HalloWishes
. It can be seen any where around the park. While it is true that you can view the Fireworks display from just about anywhere during the Disney World Not So Scary Halloween 2015, you can’t see it all unless you are near the Castle. The light show with sounds and music add a whole other dimension to this Fireworks show. 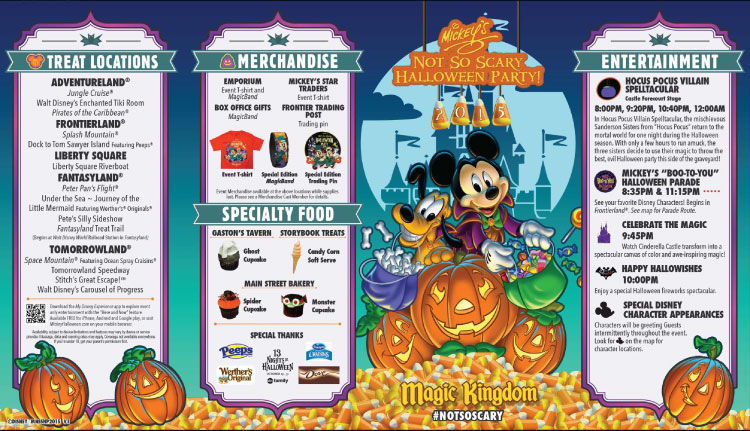 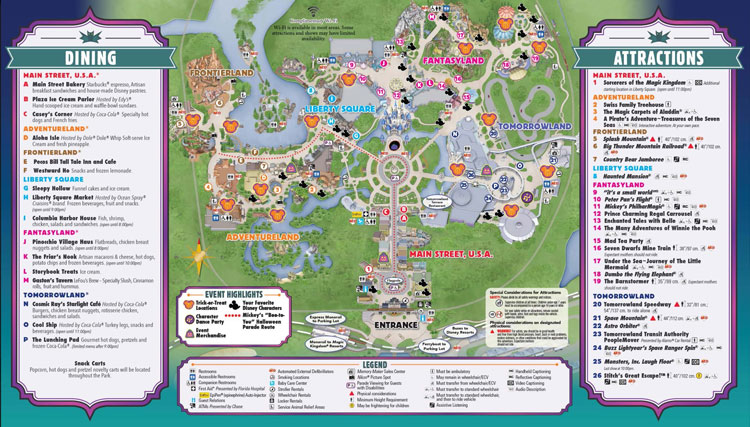 Kids love to go house to house and get candy from neighbors while being dressed up as their favorite characters. Make sure they know that when they visit Disney World Not So Scary Halloween 2015 they will not miss a thing. In fact, there is so much candy at this celebration you might need to hold back on how much you get. When you purchase a ticket for Mickey Mouse not so Scary Halloween Party, you automatically get a treat bag for the festivities.

The bag you are given at Disney World for getting your treats is not very large and many guests don’t feel it holds enough. You are welcome to bring your own bag if you would like.

The treats are held at a total of 14 locations throughout the Magic Kingdom in 2015. If you start filling up your treat bags too early, you will end up lugging it around the park all night. Another option is to wait until after the fireworks show to start your trick-or-treating run. This allows you to fill up on as many goodies as you like without having the extra weight to carry.

As mentioned above, 14 locations are found around the Magic Kingdom. If you look at the Map for Mickey’s Not So Scary Halloween Party, you will see each location represented by an orange, pumpkin-like Mickey Mouse head.

You can find many of your most memorable Disney Characters roaming around the park during the Party but there are also a number of Meet and Greets as well. I think one of the best would have to be Jack Skellington and Sally from the Nightmare before Christmas. These characters really stand out at the Halloween season and the costumes are incredible. Here is a list of who you might see and where to find them:

With every passing year, the Disney World Not So Scary Halloween 2015 just continues to grow. Disney has added a new Happy HalloWishes Dessert Premium Package with treats you will not find any where else in the park. Not only do you get something new and scruptious, this package also gives you a premium viewing area for the Disney World Boo to You Parade and the Disney World Halloween Fireworks HalloWishes. It is certainly worth checking out, even though it does cost additional to attend.